In the first, The (Paltry) Economics of Being a Novelist, she describes the monetary underpinnings of the novelist's business. She talks about things like advances, royalty checks (apparently authors get only two a year), the shelf life of a novel, and other such things. The inevitable conclusion is, of course, don't do it for the money.

In the second, The (Unlikely) Economics of Your Book Becoming a Movie, she described how novelists (theoretically) profit from their books. She tells about her experience from when Pay It Forward was adapted to film. No surprises here either: if your name isn't J.K. Rowling or Stephen King, there's mostly no money and definitely no creative control.

Great articles for anyone ever entertaining the thought of being a novelist and wondering about the process, the business side of things, the journey, etc.
Posted by Melly at 11:53 pm 5 comments 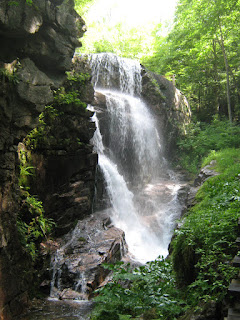 I guess that following the few weeks I just passed with human rights issues largely on my mind, it didn't surprise me to find myself in New Hampshire where the state motto (or whatever it's called) is Live Free or Die.

I'm not sure how much I like this motto. Sounds a bit like a command, which kinda contradicts the motto. It's also quite assertive, which sorta offends my "delicate," or nice, or polite, Canadian self. But it just seemed fitting.

Anyways, I'm in the White Mountains. It's gorgeous.
Posted by Melly at 10:32 pm 5 comments

When Fences Are Built 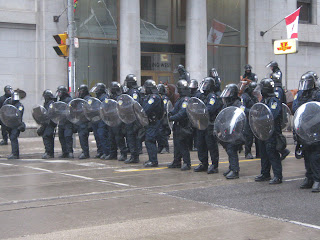 Every once in a while, a subject touches me so much that I find myself back in my old blog, just having to tell the world (that is, my 2.5 readers) how I feel.

In preparation of the summit, Canada (the gov't, police, army, all of them combined and more) turned a part of downtown Toronto into an armed fortress with a security zone. They've erected a 9 ft high fence to protect that zone where the not-so-welcomed leaders were to meet. They've brought in 5,100 officers, and in total had some 20,000 personnel involved in security for the two summits (G8 too). Then, they also secretly passed a law giving extra powers to police for a few days.

When the gov't denies the citizens basic human rights, and when people can't walk about freely where they live, you can't expect anything else -- people will protest.

Power begets power and absolute power corrupts absolutely. So was the matter with the extreme force they showed (fence, cops etc.) that irked Torontonians and Canadians, and so was their use of power afterward during the peaceful protests. 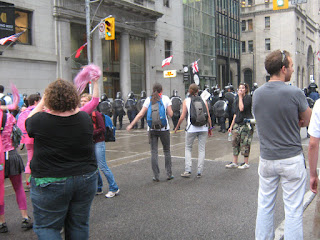 I went downtown Saturday afternoon to witness the protests. I was not intimidated by anyone in the crowd, but the police sure scared the crap out of me. They were the ones fully armed, not anyone else. They stood like a bunch of thugs in their black (bloc) uniform, not anyone else. They stood there in full riot gear in front of pink-clad dancing youngsters that just wanted their streets and their human rights back -- the ones the Charter promises them. The image was surreal. For a moment, visions of Tiananmen Square flooded my mind.

Videos are abound on YouTube of police's incomprehensible behavior and use of force when it wasn't necessary and the lack of it when it was. Police didn't protect anyone Saturday when goons smashed windows all over downtown, and they sure as hell didn't protect anyone Sunday when they arrested and detained peaceful protesters in the rain for hours.

By now, the police have zero credibility now in the eyes of many. Quite truthfully, when I listen to one of them talk, hoping to get a glimpse of understanding, they don't even make sense. It's hard to believe a man with a shaky voice who looks like he knows he'll be made the scapegoat come investigation time. And all this time, not one decent police officer came forth and spoke out, not one refused to attack a peaceful crowd.

Those goons that smashed the windows and burned police cars, and those officers that trampled my human rights are no different. Both are breaking the law (or what should be law if they didn't pass a secret one that gives police extra power and allows them to deny my "right to be secure against unreasonable search or seizure;" and my "right not to be arbitrarily detained or imprisoned"). They were both scary, and both acted like thugs who disregard the people around them and their surrounding.

My friend Ryan says I'm just experiencing a moment of clarity. That Canada has always been a police state, and that recent events just showed it to everybody. I'm starting to think he may have a point.

The whole world cheered when they tore down the Berlin Wall. And so many demonstrated and opposed the wall Israel has built around the territories. Don't they know by now that walls are just plain bad? Have they not figured it out yet?
Posted by Melly at 11:47 am 1 comments

When I first heard of Pride and Prejudice and Zombies I thought it was a joke.
Because I was going on vacation and looking to read something light while sunbathing, I actually bought the book. For a laugh.

Pride and Prejudice by Jane Austen is one of my favorite books of all times. Yes, I know some consider it the Harlequin romance of the time, but I absolutely love that book. So I was ready for a funny parody of sorts, but boy was I was disappointed.

The book is nearly verbatim the original, plus the occasional paragraph or sentence mentioning the zombies or describing the fights against them. While for a second there I thought it was the unfortunate result of some misguided feminist trying to empower the women in the book, I was soon greatly disappointed as not only were they not empowered, the great powers they actually possessed in the original book were fully lost.

It then took me no time to realize the author is male, which was of course confirmed when I checked the cover. Seth something. He actually had the nerve to write by Jane Austen and Seth something. How can someone be so arrogant as to think he can put his name next to hers? He really think himself her equal? I assure you, he's not.

The addition of the zombies was not funny, the "fights" and martial arts references were quite boring (despite the fact that I am a martial art practitioner and love action in films and books) and the relationships, in fact the whole story was made flat.

I know Pride and Prejudice is public domain, but does it really give anyone the right to bastardize it so? Should we allow such work? And to think this was actually a New York Times bestseller just really irks me. How? How is that guy allowed to make a fortune on the back of a work he didn't write? What's next? Romeo and Juliet and Aliens? War and Peace and Elmos?

[To be clear, I very much enjoyed Bridget Jones (although they have stopped with the first one). Yes, it was a remake, but it wasn't verbatim and it was just fitting.]
Posted by Melly at 7:22 pm 9 comments

Condemned to be free

erix!
OK, so I'm a faithless person. I'm not even sure what that means. I guess I'm an atheist since I don't believe in the existence of (a) god(s). Even writing this makes me embarrassed to the core, like saying I don't believe hobbits exist.

I don't often discuss this though. I respect other people's beliefs to the extent that they believe it. I don't think it's in my place to tell other adults what they should or shouldn't believe in. This is plain rude, and I hope my manners, while I can definitely be direct, are slightly better than that.

Plus, I really have no energy for such a discussion with its inevitable conclusion. I don't feel the need to justify myself, nor persuade anyone.

Some may already feel that saying the above was rude enough, but hopefully most will take it in stride, just like I do when listening to their explanations about their faith, whatever it may be.

I can totally understand therefore much of what Charlotte Allen at the LA Times says when she thinks that "What primarily seems to motivate atheists isn't rationalism but anger." I can relate to her sentiment regarding Dawkins and others. As an -- fine I'll agree to be called by that name for the sake of being clear -- atheist, I don't understand why they have to talk so much about god. Really, many of them talk about god more than religious people.

Still, I also think Allen's position is defensive in a way, and it shouldn't. Granted, most faithless sorts sound condescending, myself included probably. But really, if people have such strong faith, they really shouldn't give people like me a second thought.

But most, I don't even understand why get into such arguments. In a way, I guess treat religious beliefs like I do sex. It's personal and no one's business.
Posted by Melly at 1:23 pm 5 comments

Scribd -- a friendlier self e-book publisher for authors

I seriously don't know much about self publishing. All I know is that it's definitely getting more attention.

Today I read on NYT about Scribd, an Internet start-up that introduced today a way for anyone to upload a document to the Web and charge for it. Already Scribd is the most popular document-sharing site, the Times say, as it takes a YouTube-like approach to text.

But now there's a store too, which allows authors or publishers to set their own price for their work and keep 80% of the revenue, which apparently is a much higher percentage than higher services (I really don't know, does anyone know how much Lulu.com charges for example?)

Other features include security measures, or unprotected PDFs, which gives them the ability to be read on any device (not just the Kindle).

So far, no major publishing houses have signed on to the store, though the company says it is talking to them. The independent publishers Lonely Planet, O’Reilly Media and Berrett-Koehler will add their entire catalogs.

The Scribd store will also give unpublished authors, or authors who are in a hurry, a well-trafficked Web forum on which to post their books, charge for them and see immediate results.

There have been some success stories of self publishing, although not many. Regardless, I definitely it's exciting there's another service for writers in the Internet age.

Anyone with some self-publishing experience can give a better insight into the new service?
Posted by Melly at 1:41 pm 1 comments